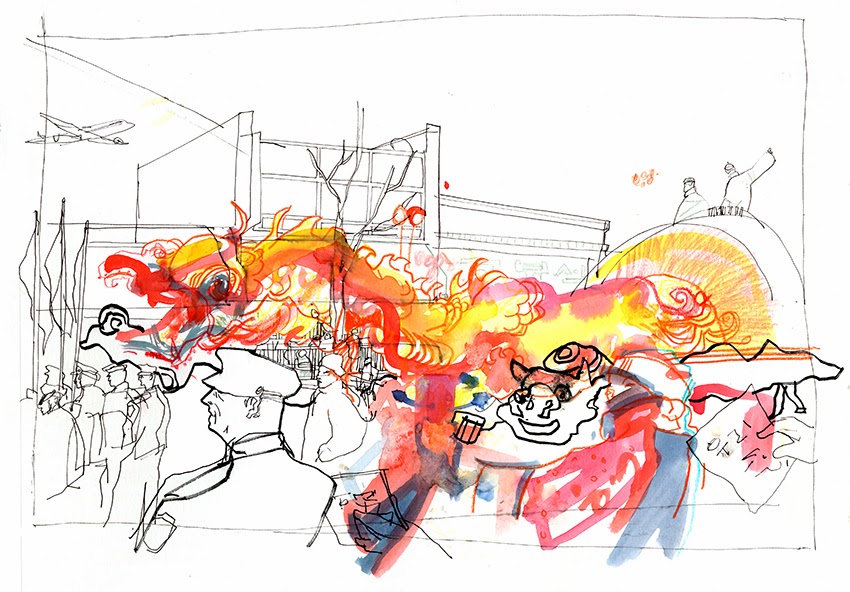 Saturday was the Chinese New Year parade in Flushing, Queens, home of one of the largest Chinese populations in the western hemisphere. “This is going to be good!” I thought, and hopped on the 7 train to do a few drawings. When I got out at the Main Street station expecting crowds, I thought I had missed it – even when I rounded the corner to where the barricades were set up, it was pretty sparse, not the mad tourist scene of the parade in Manhattan’s Chinatown. Which was kind of nice, actually, it felt like a very home town celebration.Â (Also, it was about 10 degrees fahrenheit, so maybe all the smart people stayed home, ha ha!)There were the requisite policemen of any New York City parade, a marching band, a few civic groups, and of course, the lions and dragons that are the highlight of any Chinese New Year festivities. But it seemed the most important part of this parade were the flyers that were handed out to all the bystanders. Ads in Chinese for everything you could imagine, join this religion, hire these lawyers, eat at these restaurants, consult these life coaches…on it went. A bonanza of junk mail wound it’s way up Main Street along with the revelers. Even ads for a hospital in the area. The infamous Ronald McDonald got in on the act too, you can see him at the left of the drawing below… 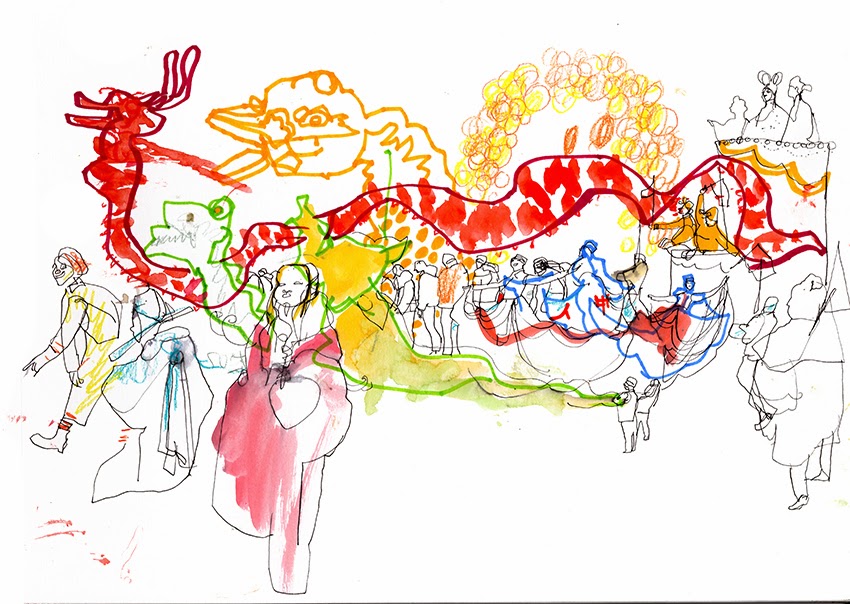 I think the funniest part of the parade was the group of high school students from Francis Lewis high school. Marching along in the midst of the overly-exuberant middle aged parade marchers, they moved silently in their puffy jackets, each with their heads bowed down low, enduring the excruciating pain of being forced by their parents to march in the parade. It was so funny to see them – you can catch a glimpse of a few of them in the midst of my drawing above. It was like they were on a death march.
I’m really not exaggerating that much! I love to watch the acrobatics of the people in the lion suits. They really get into dancing in those things! Reminded me of the performance in Grand Central of the Nick Cave horses last spring. Similar moves. The Chinese section of the parade ended with these women in flowy robes followed by other men and women walking within little boats that said “Happy New Year’ on them, and then a massive banner. I thought the parade was over, but then I heard some music and saw that the Korean section of the parade was beginning. I looked up and saw two giant Korean bobble-head figures dancing toward me, Wow. And behind them marched a small group of Korean veterans. I’m not sure if they fought in the Korean war and if so, did they fight with the Korean army or the American army? I guess in a way it’s irrelevant, they fought for their country and so now they were honored and marching in the parade. It’s interesting that the New Year’s parade in Flushing also includes Koreans and Korean-Americans. They celebrate the lunar New Year too, of course, and there are many Korean people living in Queens as well. It was so interesting to me to see the total change of graphics between the Chinese and the Korean sections of the parade. The Chinese part was all red and gold and decorative curves everywhere; the Korean section was all blues with large, angular shapes and over-sized details. Somewhat like the differences in their calligraphy. 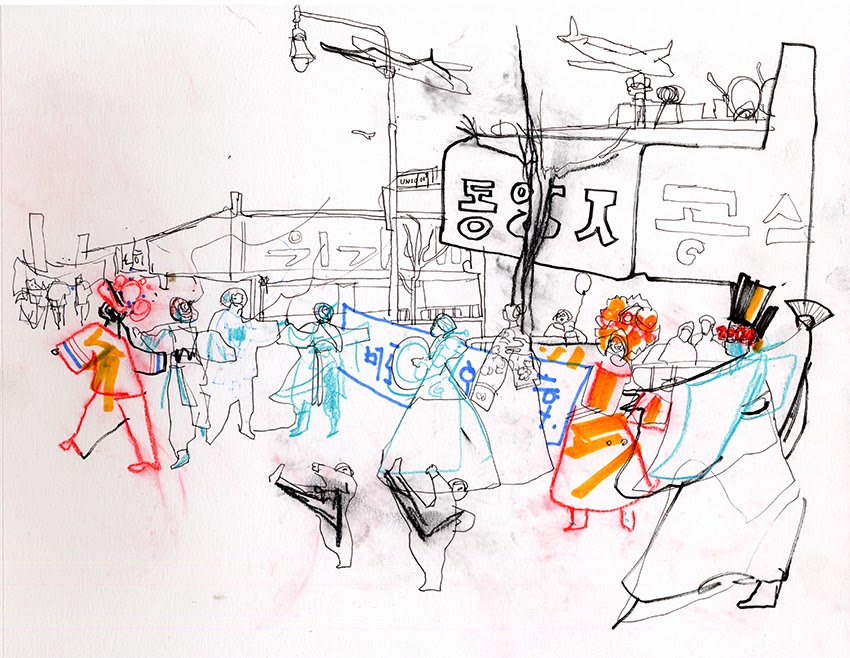 The cutest part of the Korean section of the parade were the little boys doing their Taekwondo kicks up the block. Look out!! My favorite though, was one man who was the master of ceremonies of some kind, wearing a large teal robe, a tall black hat, a surgical mask, and a pair of 2014 glasses from January 1. Quite the get up, and he really seemed to enjoy wearing it all and twirling down Main Street.
You may also notice the planes flying overhead in my drawings – we were very close to JFK airport. All in all it was a very enjoyable morning, although I froze to death and dropped my pad into a snow bank more than one time. By the way, it’s the year of the horse. Kung Hei Fat Choi!